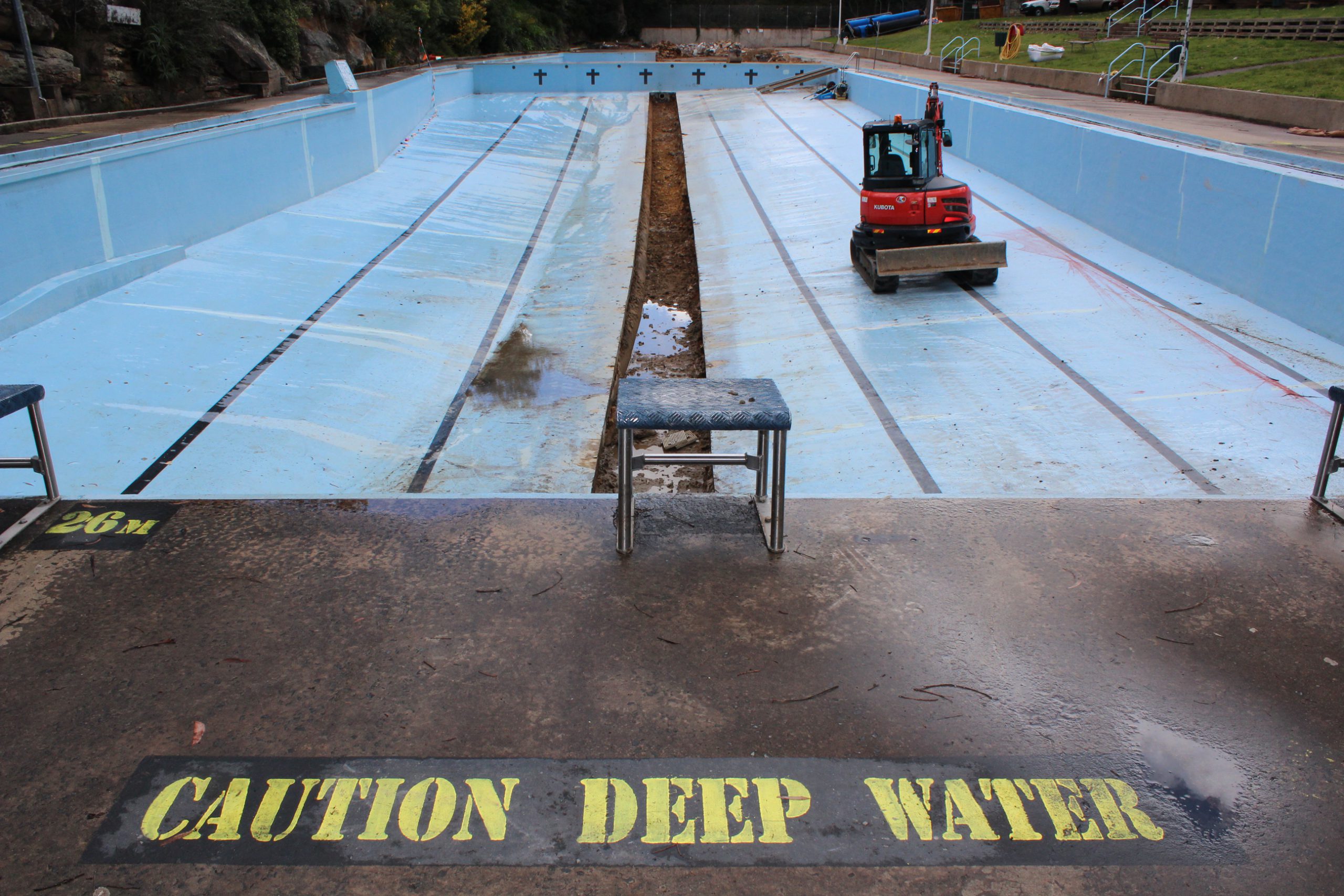 Contractors working on behalf of Council started preliminary works this month and have already demolished the toddlers pool and begun excavating and replacing the ‘return line’ which feeds water to the 50 metre pool.

Further improvements in the months ahead will involve the forming of a new integrated Learn to Swim pool and play pool with water toys.  An accessible ramp from the kiosk entry level to the pool deck will also be included, as will tuition seating for the Learn to Swim pool and the erection of a shade sail.  A new liner will also be installed in the main pool and the depth of both existing pools will be increased by almost 15 centimetres. Further enhancements include refurbishing the existing filtration unit and boosting the Splash Pad and Play Pool areas with new filtration and water heating systems.  Final improvements will include rejuvenating the kiosk and amenities block.

These works are part of a $2.5 million upgrade to the facility designed to preserve and enhance the pool which was opened in 1931.

“The pool contains a wealth of history and natural beauty,” Mr Paull said.  “However after years of service the pool is starting to show its age.”

Mittagong Pool is the Shire’s oldest public swimming facility with records indicating that the site of the pool was used for recreational swimming as early as the mid-1870’s before being officially opened in 1931. In 1959 the baths were converted to an Olympic-size pool.

“Ultimately, these upgrades will beautify, modernise and extend the life of this wonderful community pool.”

“Patron safety, contractor availability and funding all required that the pool had to be closed for the full duration of the overhaul,” Mr Paull added.  “Unfortunately this means that it will be out of action for the forthcoming summer swim season.”

The refurbishments to the pool are expected to be complete by mid-next year.

To offset the temporary closure, Council has announced a range of pool entry subsidies for residents of the Shire’s northern villages.  Affected residents inconvenienced as a result of the closure will be eligible for half price entry to Council’s Bowral Swimming Centre once the 2014/15 swim season kicks off.

Schools nearest to the Mittagong Swimming facility will also be able to claim additional travel costs during the construction works.

From the start of the October swim season, residents from Aylmerton, Balmoral, Braemar, Buxton, Colo Vale, Hill Top, Mittagong, Renwick, Wattle Ridge, Welby, Willow Vale, Woodlands and Yerrinbool will all be able to gain the discounted entry by providing some form of identification. Examples include a drivers licence, bus pass, student or pension card.

“We’re encouraging all residents from our Shire’s northern reaches to take advantage of these subsidies over the summer season and continue swimming at our other facilities until the pool re-opens,” Mr Paull said.

Schools who have not already booked an alternate pool for an upcoming swim carnival can do so by contacting Council’s Customer Service Team on phone 4868 0888.

As a result of the temporary closure of Mittagong Pool, the opening hours of the Bowral Swimming Pool will be extended to compensate for the inconvenience.

Bowral Pool will subsequently open from the 4 October and Bundanoon Pool from the 15 November 2014.