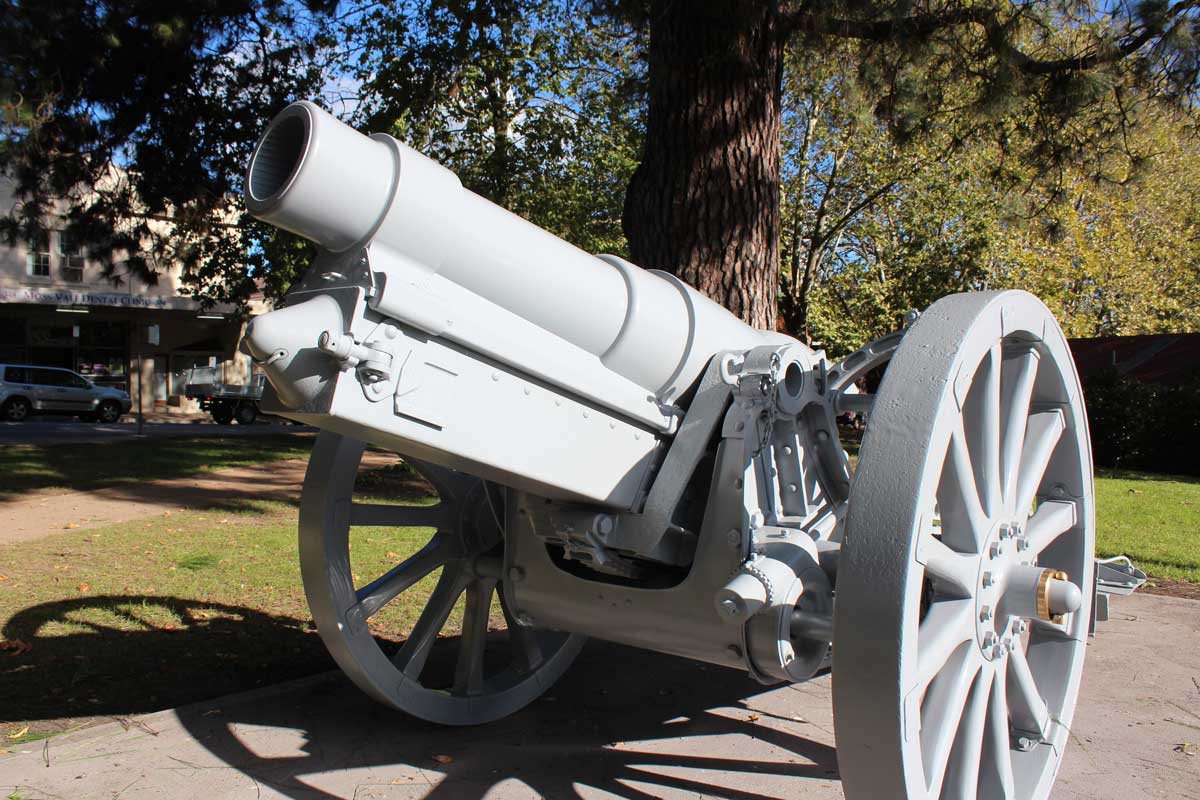 A one-hundred year old German-made Howitzer Gun captured by Australian troops in the First World War will be unveiled by Wingecarribee Shire Council in time for ANZAC Day.

Formerly located in Apex Park in Moss Vale, the restored gun will be unveiled at a small ceremony in Leighton Gardens on Thursday 13 April 2017.

Council’s Asset Officer in charge of the gun’s refurbishment and relocation spoke about the restoration project.

“Long-time residents of Moss Vale may remember the old gun which sat in the small park at the northern entrance to the town,” said Kylie Stefaniuk.  “But many may be unaware of its significance.”

“And after being exposed to the elements for 45 years the gun had deteriorated to the point where the timber wheels had partially rotted away,” Ms Stefaniuk said.  “It was in desperate need of restoration were it to be saved.”

A year-long restoration project ensued and was funded in part by the NSW State Government’s Community War Memorial Grant and the Federal Government’s Saluting Their Service Grant.

“What’s particularly special about this restoration was that we were able to complete and unveil it in time for this year’s 102nd anniversary of ANZAC Day,” Ms Stefaniuk added.

“We think it’s important that when people view the restored gun they take a moment to reflect and appreciate the efforts that our troops went to in securing it.

“Guns like this brought back home were considered war trophies and were not intended to glorify war,” Ms Stefaniuk said.  “They were erected in parks around the country to remind us of the bravery and in many cases of the ultimate sacrifice that many of our young soldiers paid.”

The newly restored Howitzer Gun was originally captured by the 57th Battalion, 1st Australian Imperial Force (AIF), on 8 August 1918 during the first day of fighting in the Battle of Amiens.

The Battle of Amiens marked the end of the stalemate of trench warfare on the Western Front.  It was also the first of several battles between August and November 1918 which became known as the Hundred Days Offensive and would eventually lead to the end of World War I.

The 57th Battalion would go on to capture seven Howitzers during the attack on the town of Guilaucourt in France.

Battalion members were formed in Egypt in 1916 from a combination of Gallipoli veterans and new recruits including three young men from the Southern Highlands.  The men were Thomas Keleher of Bowral, Wallace Milton Quigg of Penrose and Stanley Morrow of Kangaloon.  All three men would eventually lose their lives fighting in France.

Howitzers were one of the most important artillery pieces in the arsenal of the German Army during the Great War.  The 15-centimetre gun in question fired a 42 kilogram shell capable of a range of 8,500 metres.  Some 3,500 of these guns were produced between 1913 and 1918 with the one on display in Leighton Gardens having been manufactured in 1917.

The unveiling of the restored World War 1 Howitzer Gun and history plaque will take place from 11am on Thursday 13 April 2017 in Leighton Gardens, Moss Vale.

The unveiling will also feature a performance by the RSL Rural Commemorative Youth Choir.