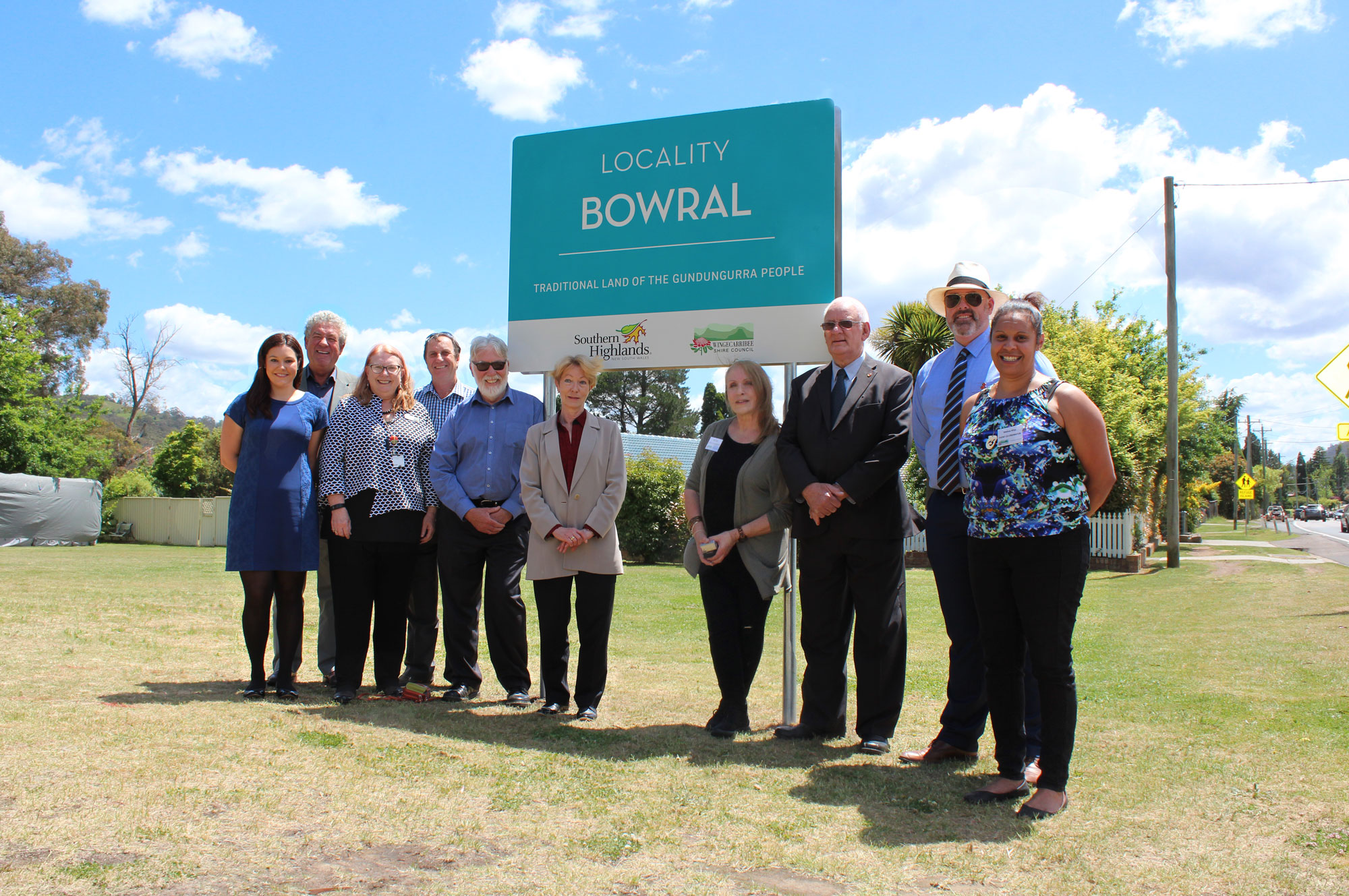 In an effort to improve reporting details for Emergency Services, Wingecarribee Shire Council is rolling out a series of new locality signs which define the borders of localities across the Shire.

The new signs also recognise local Indigenous history by including the name of the Aboriginal Country which has been used by Aboriginal people for thousands of years.

Students from Chevalier College, Oxley Primary and Bowral High Schools joined local Aboriginal leaders and councillors at the entrance to Bowral and Burradoo for the unveiling on Thursday 10 November.

Deputy General Manager of Corporate, Strategy and Development Services Mr Mark Pepping said the unveiling was a culmination of a two-pronged project which was years in the making.

“First and foremost we thought it important that the borders of the Shire’s localities were properly defined,” he said.

“In large semi-rural areas like our Shire it is critical to have accurate locality information when reporting accidents or when emergency services are dispatched.”

“Some of our Shire’s roads stretch across three or more different localities,” Mr Pepping added.  “Wombeyan Caves Road is a perfect example.”

“A further benefit is that it will help residents and visitors navigate their way around our Shire.”

“However it was also an opportunity to recognise that whilst the Shire is made up of over 50 localities, the area also has a rich Aboriginal culture.

“Aboriginal People refer to the area as Gundungurra which is part of Aboriginal Land and Country and we thought the new signs were the perfect opportunity to acknowledge this history.”

As part of the two-year project, 75 back-to-back signs will be erected at gateway entrances to our Shire’s 53 localities.

Following consultation with the Shire’s Aboriginal Elders all signs will feature the wording, “Traditional land of the Gundungurra People”.

Existing town signs located on the perimeters of towns will not be replaced under the locality signage project. The new signs will be positioned on the gazetted borders which in many cases are located several kilometres away from the town itself.

“We understand that many of our Shire’s towns and villages have their own unique identity and this project is in no way intended to replace these existing signs or monuments,” Mr Pepping added.  “They are meant to supplement and improve existing signage and at the same time celebrate our Aboriginal heritage.”